Reflexology – a benfit for body, spirit and soul

Reflexology has a holistic approach in its therapy methodology. This feet treatment not only has a positive impulse on the body in general but also feels pleasant and relaxing. In Eastern cultures reflexology is being used already for thousands of years. In Europe this form of therapy became known only in the beginning of the 20th century.

In general our feet are heavily used as they permanently rebalance displacements within the spine. The feet are exposed to pressure on a daily basis. No other part of the body are so often neglected. Most people only start a treatment when the feet already start to hurt. Especially small shoes can be a big enemy to the health oft he feet. They need consistent care. Reflexology serves hereto as an appropriate aid.

Reflexology uses specific techniques that make use of each zone within the feet that are linked to certain organs in the body. By using selective pressure the stimulus enters the body through the skin, muscles and nerves and arrives through the blood and lymph nodes at the relevant organ. Punctual stimulation improves the body’s energy streams and breaks blockades which ends up with a better blood circulation. The body’s self-healing capabilities are consequently substantially supported.

What else can be treated by reflexology? 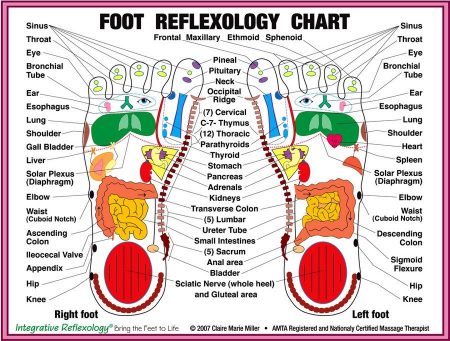